Mohamed Mbougar Sarr knew that winning the Goncourt Prize would not just be a literary affair. He had even described some of the potential pitfalls in his own book.

In the most secret memory of men (The most secret memory of men), Diégane Latyr Faye, a young Senegalese author – the alter-ego of Mbougar Sarr, we suspect – is warned by a Parisian friend: “African writers and intellectuals, do not be fooled. It is not impossible that you will be acclaimed by the French bourgeoisie just so that they can clear their conscience. . . But believe me, deep inside you are and will remain strangers, despite the value of your work.

About 300 pages later, in Dakar, he receives this Facebook message from a young Senegalese activist: “White people can celebrate you as much as they want, give you all the prizes they want, talk about you in their big newspapers , but there you are nothing . . . You are . . . a house nigger.

Now honored by the French literary establishment as the first sub-Saharan African to win the prestigious award, Dakar-born Mbougar Sarr is navigating for better or worse in these complex times for real.

A few days before we met, a stranger kissed him in the lobby of a hotel in Tours. The woman, a Malian, could not read, she told him, but she was delighted that an African would win such a prize – she had thought it was impossible. But his celebration did not please everyone: at home, some deemed him unworthy of representing Senegal because he wrote about homosexuality – still taboo – in a previous novel, pure men (real men).

Africans honored in Europe are inevitably viewed with suspicion in their home countries, Mbougar Sarr tells me in the offices of his Parisian publisher Philippe Rey. “They are accused of collusion [with the former colonial powers], or to be uprooted,” he says. He adds: “Suspicion is a necessary phase to go through. So that over time it ceases to look suspicious.

Mbougar Sarr’s victory was hailed as another sign of the vitality of African literature – this year alone, Franco-Senegalese writer David Diop won the International Booker Prize, South African author Damon Galgut received the Booker Prize and Abdulrazak Gurnah, born in Zanzibar, received the Nobel Prize. . But this year’s Goncourt has additional significance because so few writers from the Francophonie win the best prizes in French writing.

Many African writers have been published since the beginning of the 20th century in France, why aren’t they more recognized?

What Mbougar Sarr sees in this scarcity is the undue influence of France on its former colonies after the wars of independence. For decades, Paris remained the intellectual “centre” and its former colonies the “outskirts”, a phenomenon less common in the former British Empire, he says.

This means that characters such as Zimbabwean writer Dambudzo Marechera, who won the Guardian Fiction Prize in 1979 and died in 1987 of an AIDS-related illness, gained recognition earlier in the UK, he continues . “Many African writers have been published since the beginning of the 20th century in France, why aren’t they more recognized? Because they come from the margins. We could be a label, a niche, but there was a glass ceiling, which still exists in the media, commercially, editorially — which does not mean that there is not from time to time a singular trajectory of an African author who won a prize.

“But that is changing. That has to change,” he added. “This award would not have been possible 20 years ago.”

The 31-year-old, who lives in Beauvais, north of Paris, says being an icon can be boring “if it’s the only thing people remember”. In his novel, which puts its protagonist Faye on the trail of a mysterious “Rimbaud noir” engulfed in a plagiarism scandal in colonial France in 1938, Mbougar Sarr “seeks to question the way in which a book and its author can be reduced to an identity, a skin”. color, an origin,” he says. Turning his gaze to the bookshelves around us, he adds, “That said, I know I can’t escape it – and maybe I shouldn’t try to escape it.”

Winning the Goncourt was mostly a positive experience, he says. Describing the moment the award was announced last month, Mbougar Sarr recalls the media frenzy and “inside, a cocoon of deep, simple joy”. Since then, it’s been an emotional whirlwind – and a life-changing outcome for its publishers, Philippe Rey and Dakar-based Jimsaan, who have sold the rights to the book in more than 38 countries (Harvill Secker is set to publish the UK translation at the end of next year, Rey tells me).

“What I can say is that I am first of all a writer, an African writer who received the Goncourt, that I am very happy, that it forms a whole. But this set is structured around literature first, not politics.

And of course, the most secret memory of men is also structured around literature — its meaning, its value in society and its demands. The character known as the “Black Rimbaud”, the elusive TC Elimane, is based on the life of Yambo Ouologuem, a Malian writer who won the Renaudot prize, another prestigious French prize, in 1968, before being accused of plagiarism and disappear from the literary scene.

French is also my language. It’s not my mother tongue, it’s a language I learned at school, a head language, but it’s my writing language, for now’

Critics pointed to a rare feather (literally, the tip of a fountain pen) or “voice”, one of the most gratifying literary compliments in France. Follower of mise en abyss, Mbougar Sarr is a skilled storyteller — cerebral but never pompous, torturous but also funny. We like to follow Faye’s peregrinations, on the trail of the obscure arts that Elimane left across three continents and more than a century. Along the way, we meet gorgeous female literary figures, like the intrepid “mother-spider,” a well-established 60-year-old author who becomes a lover and spiritual guide.

Mbougar Sarr may have succeeded in writing his “essential book”, the one he believes every writer has within himself and which “doesn’t talk about anything” in particular and “contains everything”.

In terms of style, Mbougar Sarr is clearly a perfectionist. His feather is sophisticated and refreshing in its audacity to twist French expressions and subvert metaphors. There are some linguistics discoveries which will marvel readers of fluent — and perhaps untranslatable — French (the ultimate literary compliment, according to one of his characters). This creativity of French writing — which I also savored recently with the Algerian author Kamel Daoud — is another reason why it is so vital for the Parisian literary world to open up more to French-speaking writers.

From politics, economics and history to art, food and, of course, fiction – FT writers and critics pick their favorite reads in our annual roundup of publishing highlights

Mbougar Sarr says anxiety mounts when he writes because “very quickly [he] faces its models” — “It’s not that I compare myself. But because those are my standards of literary excellence, it can get nerve-wracking. It’s like all these writers, all these books are with me in the room,” he says.

Winning the Goncourt did not give him more confidence, he said. “It’s a little early to tell if this has changed anything in me, as a person or as a writer. . . The writing angst, the bar I put on my writing, will remain the same At least I hope it stays the same,” he says with a smile.

French-speaking authors are often criticized for writing in the language of the former colonial power, but Mbougar Sarr feels relieved. “It may be a question of generation, but I have no tension with the French language,” he says. “It’s also my language. It’s not my mother tongue, it’s a language I learned at school, a head language, but it’s my writing language, for now. It is one language among others, which conveys part of my imagination and part of my history. 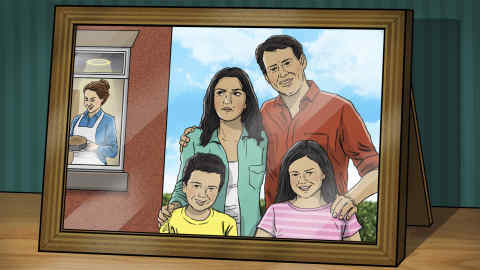 He continues: “That does not mean that I do not know that it is a colonial legacy, and that as such it can cause problems. This is not an opinion shared by all writers, there is a debate.

Mbougar Sarr says he dreams “in several languages”. One day, he says, he will write in Wolof and Serer, his first spoken words, once he has mastered them in writing to “explore what they have to offer, what part of me they carry”.